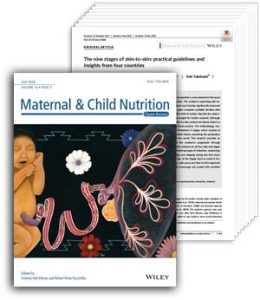 The evidence supporting skin‐to‐skin contact in the first hour after birth is robust and includes significantly improved outcomes for both mother and infant. Among the advantages is that it has been shown to increase breastfeeding initiation and exclusive breastfeeding while reducing formula supplementation in hospital. Yet immediate, continuous and uninterrupted skin-to-skin contact has not become standard practice, with only 45 percent of newborns experiencing early skin-to-skin and breastfeeding.

In a new article in Maternal & Child Nutrition, HCP faculty Kajsa Brimdyr and Karin Cadwell and their colleagues compare available data about newborn behavior in the first hour after birth, considering the four available data sets that used Widström’s nine observable stages from Japan, Sweden, Italy and the US.

The nine stages recognize the work of the mother and baby during the first hour after birth. There is work and competent behaviors that occur during this vital and unique time. Skin‐to‐skin care supports a newborn’s exploration and self‐attachment, a result of the newborn’s instinctive survival behavior to find the breast and start suckling within an hour or so of the birth, leading to increased breastfeeding at discharge.

Despite the robust research and evidence on newborn behavior when skin-to-skin immediately after birth, there is a dearth of research specifically focused on clinical practice. This new paper contributes to the field by examining the worldwide similarities of newborn behavior and progression through Widström’s nine stages. The paper also provides a new table to help others conduct research on the 9 Stages of Newborn behavior – “Nine stages for clinical practice: A chart to aid in the understanding of when a stage begins during skin‐to‐skin contact with mother.” This chart can be a tool for Quality Improvement projects and other research.

The paper concludes that the behavior of the newborn infant while skin-to-skin during the first hour or so after birth varies little from one practice setting to another, confirming the existence and timing of Widström’s original nine stages. The evidence supports making a safe space and protected time for this newborn behavior. Clinical practices should protect these first hours after birth until the newborn goes through the nine stages, self-attaches, suckles and falls asleep.